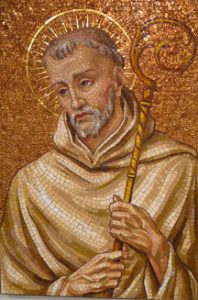 The humble beginnings of the Cistercian Order were soon followed by a rapid expansion, owed in particular to the spiritual leadership and saintly personality of St. Bernard (1091-1153), the founding abbot of Clairvaux, the third daughter-house of Citeaux. At his death, there were over three-hundred Cistercian foundations scattered throughout Europe, altogether populated by well over ten-thousand monks. A century later these numbers had nearly doubled, with foundations extending from Ireland to Poland and Hungary, from Scandinavia to Spain and Sicily, and even as far as the Holy Land.

The expansion of the Cistercian reform is a clear sign of the success and prestige it enjoyed throughout the twelfth century and well into the thirteenth. Most new foundations were occasioned by the eager invitation of an ecclesial or secular ruler, or by the desire of an already existing monastic community to become a part of the new Order.

As the success of the Cistercian Order grew, its monks left a defining mark on several aspects of the medieval world. Their simple and contemplative spirituality inspired beautiful styles of art and architecture, as evidenced by the many Romanesque and early-Gothic monasteries and churches that can still be admired today. The Cistercian skill and dedication to agricultural work, oftentimes in previously uninhabited lands, contributed to the development of Europe and served as a cornerstone of the medieval feudal economy, providing employment and sustenance for the tens of thousands that lived and worked around the monasteries.

Cistercian monks had an effect not only on the world of art and agriculture, but also on the intellectual and theological life of the Middle Ages. During the twelfth and thirteenth centuries, many monks, following in the footsteps of erudite Cistercians like St. Stephen and St. Bernard, dedicated themselves with great effect to the study, teaching and promotion of Christian culture. Monks like St. Aelred of Rievaulx, Bl. Isaac of Stella, Bl. Amadeus of Lausanne, Bl. Guerric of Igny and several others have left behind significant theological and spiritual writings. Cultivating the life of the mind and heart was an important value for the Cistercians. In 1245, the first of many Cistercian institutes of learning, the College of St. Bernard, was founded in Paris for the higher education of the monks.

During the twelfth and thirteenth centuries a great many monks were called upon to serve the Church through a variety of ecclesiastical appointments and missions. Generally speaking, a medieval respect for piety and integrity created an environment in which many prominent Cistercians were invited to act as mediators and peacemakers on behalf of papal or royal diplomacy. A famous example is St. Bernard himself, who was asked to resolve a papal schism between Innocent II and Anacletus II, two men elected pope on the same day in 1130 by opposing factions. Due to the reputation, formation and international connections of the Cistercian Order, several monks were elected or appointed bishops, especially in France, England, Italy and Germany. This fact produced the unexpected result of two monks becoming popes: Eugenius III (1145-1153) and Benedict XII (1334-1342). Both Cistercians are venerated as “blessed” for the excellence of their life and teaching. With respect to the missions, in 1204 the Abbot of Citeaux and the Cistercian Order were entrusted by Pope Innocent III with the direction of the Church’s efforts against the Albigensian heresy, which was then spreading in southern France. Dominic Guzman – St. Dominic – was in fact in the company of Cistercian missionaries when he began to conceive the plan of forming an organization specifically suited for such work, the future Dominican Order.

Next: Medieval and Early Modern Challenges >>