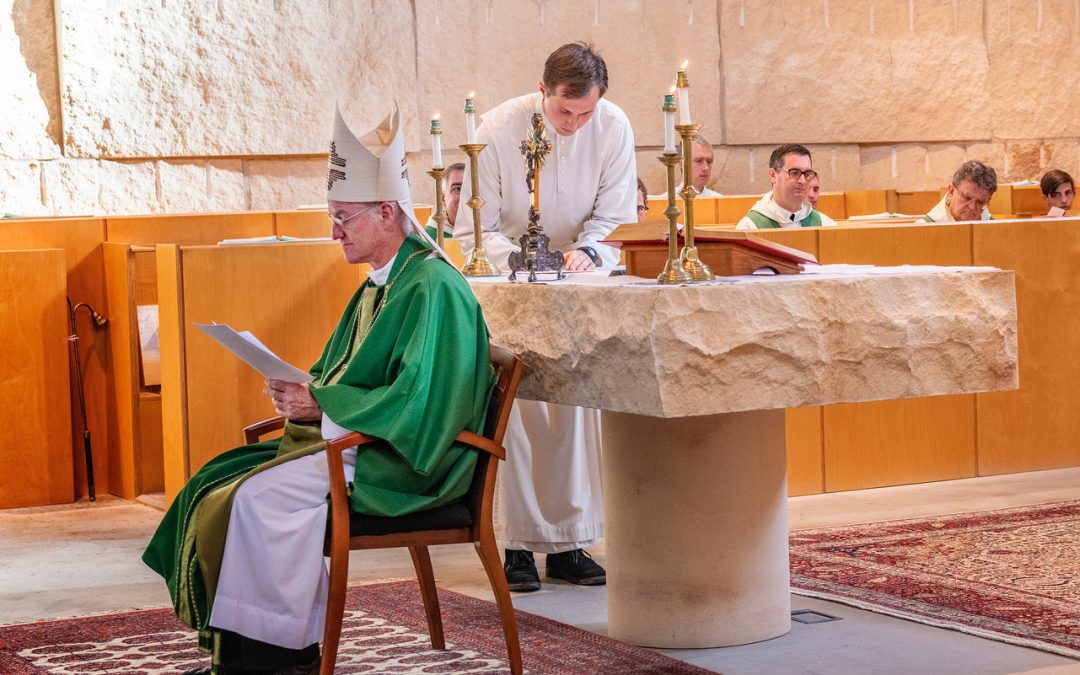 On Sunday, August 28, 2022, Br. Barnabas Robertson made his first temporary profession, committing himself to discerning his vocation within the monastery for the next three years. In the first picture, you can see him signing his vows on the altar.

Br. Barnabas was born in Texas, but he comes from a devout missionary family, and thus spent many years growing up outside of the country, including in Azerbaijan. He went to Wheaton College as an undergraduate, and then to Texas A&M for graduate studies in physics. He is one of five Aggies in the monastery. This year he will begin studying philosophy and theology at the University of Dallas, and teach Latin to Form I at Cistercian Preparatory School.

Please pray for Br. Barnabas! May God bless Cistercian with more monastic vocations, and may the monks strive always to search for God and to serve his people well!

Please pray for our new novices, Br. Ephrem (Luke) Malone and Br. Daniel Miller (CPS ’14), who entered the novitiate this weekend! They received the habit in a private ceremony as we celebrated the first vespers of the Solemnity of St. Bernard of Clairvaux on August 19, 2022.

Br. Ephrem and Br. Daniel have now begun a period of focused discernment through prayer, study and community life. Concretely, they will not spend much time outside the monastery, and they’ll have little use of things like the internet. They’ll take classes from monks on topics like Cistercian history and spirituality, psalms, liturgy, and the theology of St. Bernard. If you see them on campus, be sure to say hello. In the meantime, enjoy the pictures from the ceremony! 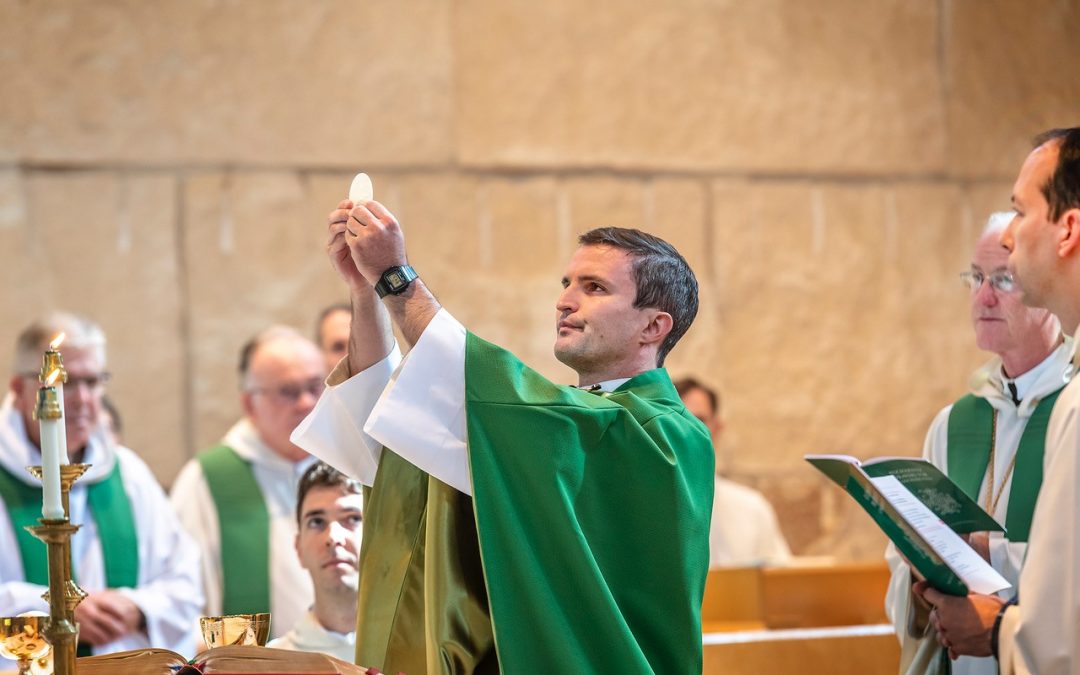 Br. Matthew Hegemann and Br. Christopher Kalan were ordained to the priesthood and diaconate, respectively, on Saturday, August 13, 2022. The following day, Fr. Matthew celebrated his first mass, with Br. Christopher serving as deacon and Fr. Thomas preaching the homily. It was a joy for the monks to welcome the Hegemann and Kalan families into the monastery this weekend, and to celebrate with these milestones in the lives of their sons! Please pray for both young men, that they might draw ever closer to Christ the Good Shepherd and faithfully serve his people. 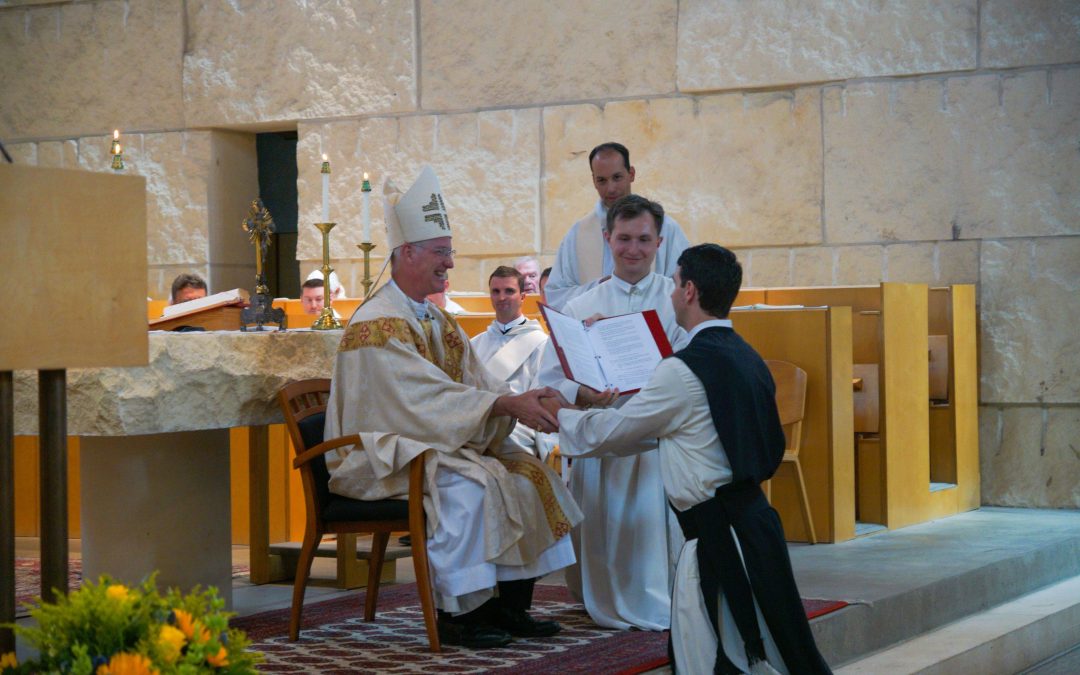 On Friday, August 12, Br. Christopher made his solemn vows!!! Thanks be to God!!! In these pictures you can see many key parts of the ritual:

As the sun shone brightly on the beautiful Sunday of March 27, 2022, many Cistercian students received the Sacrament of Confirmation. They had been prepared through campus ministry and the efforts of their theology teachers at Cistercian; they were instructed about the sacrament and its connection to Baptism and the life of the Church, and about the gifts of the Holy Spirit that it bestows. Before the celebration of the sacrament, the boys went on a full-day retreat, and many of them worked generously in service to their community, in imitation of Christ the servant.

Congratulations to these newly confirmed students! Let us pray for them. May all who have received this sacrament understand the personal love God has for each of us. May we be faithful to him every day of their lives, diving ever more deeply into the Gift we have received – the Holy Spirit – and discovering in Jesus the meaning of our lives by working with him for the salvation of the world.

On Saturday April 2, 2022, Cistercian was happy to host the second public “listening session” in preparation for the Dallas Synod. Listening sessions are opportunities for people in the diocese to come together to discuss the life of the Church, and to offer their insights to the commission charged with assisting Bishop Burns in preparing the agenda for the Synod in 2024. The topic for discussion on Saturday was the liturgy. To learn more and participate in this important and ongoing initiative, visit the Synod website. Thank you to all the Cistercian students, alumni, faculty, staff and families who helped facilitate this event! May God bless the faithful of this diocese and enable us all to draw closer to him and fulfill our mission in the world.

On August 14, 2021, Br. Matthew was ordained a deacon and Br. Francis – now Fr. Francis – was ordained a priest. The following day, on the Solemnity of the Assumption, both monks served for the first time in their new roles within the Church, as Fr. Francis celebrated his first mass at Holy Trinity in Dallas, his home parish.

Bishop Burns presided over the ordination mass in the abbey church, which was attended by many friends and family of the Cistercian community. There are many powerful moments in the ordination rite. Fr. Francis says he was struck especially by the laying on of hands:  “I think the most meaningful part of the ceremony for me was the laying on of hands that came not only from the bishop but from all the concelebrating priests present, some of whom were not even Cistercian nor men I knew very well. Yet it is precisely this universal aspect of the presbyterate, all of us being in it together, and not just me alone, that made me feel most concretely part of something much larger than myself.”

Just before Fr. Francis was ordained a priest, Br. Matthew was ordained a deacon. He had professed his solemn vows the previous day. This year, he will continue his studies in theology at University of Dallas, but now as a full member of the Cistercian community. In the spring semester, he hopes to travel to Rome to continue his studies. While still in Dallas, he will continue to serve as guest master in the monastery, and at the prep school he will serve as a deacon and preacher for the class masses of Form VII. In addition, he will serve as an assistant to Fr. Lawrence, who is the form master for Form I.

The profession of solemn vows binds a man to the monastery for the rest of his life, in a way that is similar to marriage vows. When asked about spiritual discernment, or how someone could arrive to such a definitive commitment, Br. Matthew indicated the importance of silence and counsel: “In general, when discerning, one must be open to God’s will, which involves finding time for quiet prayer and reflection. It’s only in those times that one can possibly hear God speaking and trying to guide one’s discernment. For someone specifically discerning the priesthood and monastic life, I advise finding a sound spiritual director, preferably a priest or monk himself, to help you in the discernment process. It helps to have another voice other than one’s own in the conversation!”

On the same day that Br. Matthew made his solemn vows, one of his classmates from his time as an undergraduate at University of Dallas, Br. Christopher Kalan, renewed his temporary profession to the monastic life at Our Lady of Dallas. Having renewed his vows, Br. Christopher will continue his studies in preparation for diaconal and priestly ordination. When asked about spiritual discernment, Br. Christopher noted the sense of “adventure” our lives have when they are lived with God: “For someone newly entering the discernment process or thinking about religious life I would tell them that the process is always full of adventure. God never ceases to surprise. […] God is always working in new and surprising ways, opening doors that you never even imagined for yourself. You just have to allow yourself to be open to go along with His adventure.” Let us give thanks to God for our new priest, Fr. Francis, for our new solemnly professed member, Br. Matthew, and for the continued presence of Br. Christopher in our monastery. As Bishop Burns pointed out at the ordination mass, this moment is a true “regeneration” of the monastery through an increase in vocations. Praise God. Let us pray that Br. Christopher, Br. Matthew and Fr. Francis, along with all the monks, always search for God and serve His people well.

Beatification of the Martyrs of Casamari 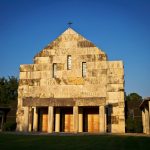 On April 17, 2021 the six martyrs of Casamari, who were killed in 1799, were beatified. The beatification was presided over by Cardinal Marcello Semeraro, Prefect of the Congregation of the Causes of the Saints. More details about the martyrs can be found in an article at Aleteia. In addition, the website of the Cistercian Order has a few pictures of the ceremony in the beautiful church of Casamari.

Cistercian Abbot General Mauro-Giuseppe Lepori gave a speech at the end of the beatification. In it he remarked, “One who accepts grace acquires a beauty of humanity that nurtures in all the desire to live in this same way. The splendor of the saints rekindles the desire that inspired the “Here I am” of each of our vocations, the flame of that “first love” (Rev 2:4) which, we must confess, we often let become a “smoldering wick” in the course of our life. The saints rekindle the desire of the first love of Christ and for Christ, reminding us that this too is a grace by which we should let ourselves simply be lighted and burn, offering it the fuel of our everyday humanity.”

May the Martyrs of Casamari rekindle our love for Christ and inspire us to live our vocations in such a beautiful manner! 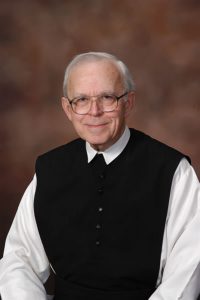 On the morning of Tuesday, November 10, our confrere Fr. Bede Lackner passed away from sepsis in the hospital at the age of 92. After suffering a stroke last year he had spent much of his time in his bed, leaving only for regular walks with his two nurses and with the monks. Despite his physical suffering, he remained peaceful and grateful. Thankfully, Abbot Peter, Fr. Joseph and one of his nurses were able to be with him at his passing.

You can learn more about Fr. Bede by reading his obituary here: Obituary of Fr. Bede Lackner, O.Cist.. On Friday, November 13, at 7:30pm there will be a rosary with testimonials in the abbey church. On Saturday, November 14, at 10:00am we will celebrate his funeral. Both services are open to the public, but with limited capacity on account of the pandemic. Both ceremonies will also be livestreamed on our CistercianDallas YouTube channel.