Valley of Our Lady

A Desire for Monastic Life: Founding to 1978

Our Lady of Dallas is not the only monastery of the Cistercian Order in the United States. In addition, there are two Vietnamese foundations for monks in California, a small house of Polish monks in Chicago, and one monastery of nuns, Valley of Our Lady in Prairie du Sac, Wisconsin (website). Today, more than twenty nuns, including several young women and even one from the University of Dallas, live their monastic life at Valley of Our Lady.

Valley of Our Lady began in 1956, when Bishop William O’Conner of Madison, advised by his confessor Fr. Romuald Pecasse, requested of the Cistercian General House in Rome that an order of contemplative cloistered nuns be sent to his diocese. One year later, six Cistercian nuns, all volunteers from the monastery of Frauenthal, a Swiss convent of the Cistercian Order founded on April 9, 1231, arrived in Wisconsin to start a new foundation. Thus, Valley of Our Lady was officially established in 1958 as a daughter house of Frauenthal (“Frauenthal” means “Valley of Our Lady” in German). During the first years, Bishop William and Fr. Pecasse supported, guided and sought financial assistance for the fledgling foundation. 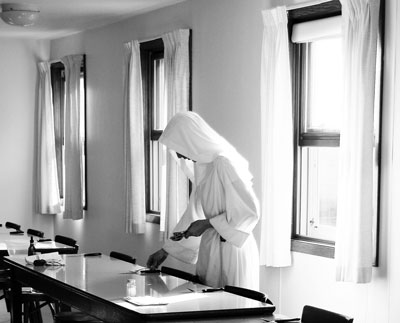 A nun of Valley of Our Lady prepares the refectory.

When the six nuns first arrived, they moved onto a farm belonging to the Grant family, one hundred and twelve acres in size. At the time, there were only two buildings on their portion of the property, which were initially intended as a temporary residence until the nuns could construct a permanent monastery. The first building was a stone house built by early pioneers in the 1850’s and the second was the old summer home of Governor Emanuel L. Phillip built in the early 1900’s. On January 6, 1958, Bishop William O’Conner blessed the renovated Grant farm homestead and established the enclosure. Other buildings were added in 1964 and 1994.

The first years were financially very precarious. The sisters began with an unsuccessful attempt to earn their living through farming, but in 1959 they auctioned off the machinery and cattle, choosing to rent the property instead. In addition, they began to bake and sell altar breads (website).

In June, 1960, the sisters were within days of foreclosure. Fortunately, a donation allowed them to pay the annual interest on their mortgage and avoid the worst. On the evening of November 2, 1960, fire engulfed the main barn which burned to the ground in spite of the efforts of several fire departments. The money received from their insurance was sufficient to pay off the entire mortgage on their property. With the economic tensions somewhat lightened, the sisters began to consider an addition to the pioneer home and Governor Philipp mansion. Finances, however, remained an issue of concern. In order to save money, in 1960 the sisters took the half-cooked flour and water wastage from the altar bread machines and fried it for their meals.

In spite of serious financial instability, the nuns quickly attracted American vocations. Mildred Hurst was the first American postulant, arriving just a few days after the foundresses themselves. She was soon followed by Paula Hannah, who entered in 1960 and would eventually become the first American superior. In the seventies, the Swiss nuns began to return to Frauenthal in Switzerland, and by 1978 all had chosen to return to their homeland. From then on all the vocations to Valley of Our Lady were American women.

The first American prioress was Mother Paula Hannah. Providence gave her the task of forming a community after the departure of the Swiss nuns.

Since 1960, the main work of the sisters was to bake, package and ship altar breads. Donations allowed them to purchase second-hand baking machines. Through a donation in 1980, the sisters were able to acquire a larger baker and thus their business grew. By 1984 there were six bakers producing sheets of bread under the eyes of several young sisters. But as the bakery grew, it began to take up more and more space in the monastery, crowding the living space of the sisters and stretching the limits of their buildings.

Insufficient funds had prohibited an adequate construction of the buildings in 1965, forcing the foundresses to settle with the 19th and early 20th century constructions. Over the years, water draining off the bluff was absorbed by the concrete base and rotted the walls and window frames. Thankfully, during the celebration of their jubilee in 1983 (twenty-five years as a foundation), the community at Valley of Our Lady received a substantial donation, which allowed the sisters at last to install some insulation and make essential repairs on their buildings.

Efforts to improve the facilities continued. In 1993, a plan to build a chapel had to be revised into a two-stage plan on account of an immediate need for new rooms in order to accommodate new vocations, provide facilities for the sick and an up-to-date facility for the bakery. Under the leadership of Mother Paula, a wing was added to include eight cells, two handicapped units and a large bakery with a new, computerized baker. The second stage in the plan, the chapel, was not able to be carried out.

In 1999, Mother Paula realized it was time to take determined steps toward the construction of a monastery. The old, cheaply built constructions are costly to maintain and inadequate for the life of the community. The arrival of new sisters continues to stretch the capacity of their buildings; and the bakery, which produces over twelve million altar breads annually, has come to fill the infirmary, workrooms and even some of the individual rooms of the sisters. Given the old construction of the chapel and choir loft, today less than half of the sisters are able to see the altar during the celebration of the mass.

Poised for the Future: 1999 to Present

In the past fifteen years, nine sisters have entered and made their solemn profession at Valley of Our Lady. Today, there are over twenty nuns, with several temporarily professed sisters and novices arriving from all over the country and even outside of the United States. The young sisters come from diverse academic backgrounds, some finishing college after studying such subjects as education, computer science, entomology and theology. Some are home-schooled, while others went to public or private schools. The community enjoys an enriching range of talents in their members, among whom are musicians and artists of every kind – photography, drawing, poetry and writing.

In 2005, Mother Paula’s time of service came to an end and Mother Bernarda Seferovich was elected prioress of Valley of Our Lady. In light of the continuing growth and needs of the community, she continued to promote Mother Paula’s initiative for a new monastery. 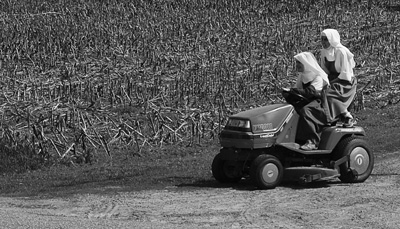 Two nuns of Valley of Our Lady work the land.

In 2000, a fund-raising campaign was begun and in the first ten years it raised about three million dollars for a new monastery. This encouraged the nuns to begin architectural plans and to look for property. In the meantime, the bakery equipment needed replacement. A generous donor stepped forward to purchase two new bakers and a computerized cutting machine in 2012. At the same time, all the rooms were filled with incoming vocations. With the arrival of each new group of young sisters, it became necessary to shift offices, workrooms and the library. A major shift took place in 2006 when six young women arrived in the space of just a few months. The old bakery was renovated into a refectory large enough for the community. With a bit of squeezing, additional rooms were made available for the new sisters. In order to fit all the sisters into the choir loft for prayer, individual kneelers were removed and long benches with book holders were installed, squeezing all twenty-four sisters into an area thirteen by sixteen feet. In the next two years, five more young women arrived. Three were professed and soon three more women were invested.

God has blessed Valley of Our Lady with vocations and a thriving work. But while the foundation was flourishing, its motherhouse was declining. Vocations in Europe are falling and the nuns in Frauenthal are aging. Recently, a decision was made to send one or two sisters to Frauenthal for short periods of time.

Valley of Our Lady stands at a pivotal moment in its history. It is no longer a dependent foundation, but rather a genuinely self-standing priory. The sisters hope to grow in the future, both in numbers and in their vocation as cloistered Cistercian nuns. They have begun a capital campaign in order to build a new monastery that will allow them more securely to continue their contemplative life for the greater glory of God (click here to learn more).