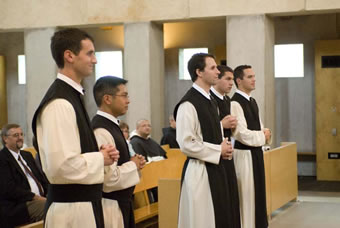 Before the end of the Novitiate, the novice writes a letter to the Abbot requesting that he be allowed to take temporary vows and enter the Juniorate. With the vote of his council, the Abbot may give permission for him to make three-year vows of stability, the monastic way of life (which includes poverty and chastity), and obedience. Vows are normally made during a Mass on August 20th, the feast of St. Bernard; as part of the ceremony, the novice removes the white scapular which he wore throughout the Novitiate and is vested with the black scapular, a sign that he is now a vowed member of the community.

The day-to-day activities of the junior brother (community prayer, work and studies, meals, and recreation) are similar to those of the novice, although he is asked to assume ever greater responsibilities within the community. The junior brother is also given opportunities to spend time with his family and friends, now as a Cistercian monk. He is allowed to visit his family once a month (if they live near the Abbey), and he may interact with people outside the monastery more frequently, though always with the permission of the junior master. 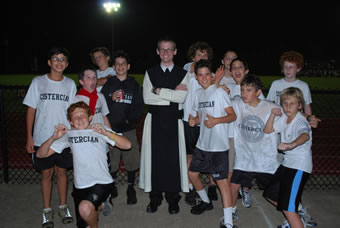 During this period of temporary vows, the junior brother becomes more familiar with the “triple vocation” of each member of the monastery: to be a monk, priest, and teacher. At some point, the junior brother is given the opportunity to teach and work with the students of the Abbey’s preparatory school. This experience gives the junior brother an insight into one of the integral elements of his lifelong vocation.

Following the traditions of their motherhouse, Cistercians in Dallas all become priests. Consequently, an essential task for the junior brother is to fulfill the academic requirements for priestly ordination. Many of his philosophy and theology courses are taken at the University of Dallas, where several of the Cistercians teach. The junior brother who wishes to pursue further graduate studies may, with the Abbot’s approval, study at another university. Many monks of Dallas have studied at the pontifical universities in Rome while living at the Cistercian General House. 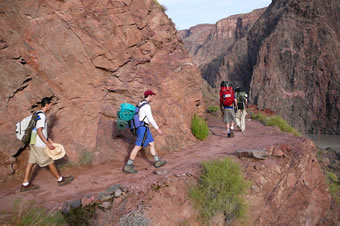 The brothers often vacation together (here in the Grand Canyon).

During the three-year period of temporary vows, the junior brother is also instituted as a lector and acolyte. The Juniorate, however, is still a period of discernment, and at the end of the three years, the junior brother must ask to renew his temporary vows if he is to continue living in the community. Before this second term expires, he can petition the Abbot and community to allow him to make his final monastic vows. Shortly thereafter, he will be ordained a transitional deacon, and approximately one year later, a priest.