Our Lady of Dallas was started by Cistercian monks of the Congregation of Zirc fleeing communist Hungary in the late 1940’s and 50’s. The exodus began immediately after the Second World War and the Soviet takeover of the country, when several monks went abroad in search of a suitable place to found an abbey capable of carrying forward the tradition of the Hungarian Cistercians.

Soon after coming into power, the Communist authorities disbanded the then-flourishing Cistercian mother-house of Zirc (pronounced “ZEER-ts), seizing control of its land, schools, and parishes. Of the two-hundred-fifteen displaced monks, more than thirty successfully fled the country, seeking refuge in other European abbeys. Some escaped alone, others in small groups. Not a few, tragically, were arrested during the attempt. 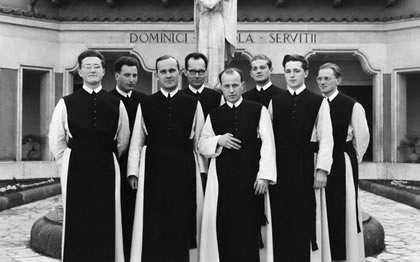 One large group managed to leave before the formal suppression of the Abbey of Zirc in 1950 and another left upon the failure of the anti-Communist revolution of 1956. The community of Zirc was able to continue a clandestine existence in Hungary during the suppression, and many of the remaining Cistercians lived lives of heroic fidelity, routinely enduring harassment and intimidation. More than a few received imprisonment and torture for their efforts.

The refugee monks spent several years in dispersion, scattered across Western Europe and in the United States. In 1954, several of them were invited by Thomas K. Gorman, bishop of the Dallas-Fort Worth Diocese, to come to Texas to help found a new Catholic university, the University of Dallas. This initial group was later joined by younger refugees who came to Texas after finishing their studies and formation in Europe. In 1961 the community formally established an independent monastery under the local patronage of Mary: Our Lady of Dallas. In 1962, the community founded Cistercian Preparatory School, modeled after the Cistercian schools of Hungary.

Next: Hungary and the Congregation of Zirc