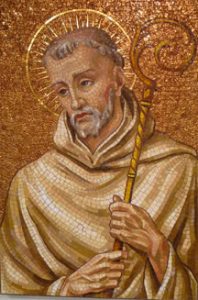 As the founder and abbot of the Abbey of Clairvaux, St. Bernard (1091-1153) was centrally responsible for the early expansion of the Cistercian Order throughout Europe. Tens of thousands heard his powerful preaching, and he personally attracted and helped many hundreds of men to follow a call to monastic life.

Canonized in 1174 by Pope Alexander VIII and made doctor of the church by Pope Pius VIII in 1826, St. Bernard stands as one of the giants of the Christian spiritual and theological heritage, and his writings represent a peak in monastic theology and spirituality. His first book, On the Steps of Humility and Pride (De Gradibus Humilitatis et Superbiae), ingeniously expands on the teaching of St. Benedict’s Rule about humility and communal living. In his treatise On Loving God (De Diligendo Deo) he describes man’s spiritual ascent to the love of God through the love of self and of neighbor. On Consideration (De Consideratione), written to Blessed Eugene III (r. 1145-1151), the first Cistercian Pope and a former student of St. Bernard’s, presents a balanced view about combining the contemplative spirit with care and responsibility for ministry in the Church. 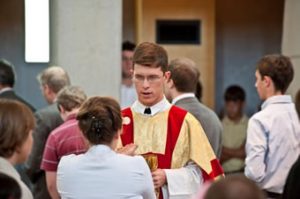 After his ordination to the diaconate, Br. Ambrose distributes the Eucharist.

Throughout his life St. Bernard was called upon to travel extensively in service of the Church, and he left behind hundreds of letters which reveal his energetic participation in all the important issues of his day, both religious and secular. He was especially renowned for the wisdom and eloquence of his preaching; in particular: his eighty-six Sermons on the Song of Songs represent the finest flower of 12th century literary style, as well as the zenith of a patristic tradition that reaches back to Gregory the Great, Gregory of Nyssa, and Origen. Similarly, one of his shortest and earliest works, a collection of four homilies about the Annunciation (Super Missus Est), had an immense influence on the Church’s Marian devotion, one that continues up to the present day.

Known for his evangelical fervor and ardent love for God and neighbor, St. Bernard was beloved for his ability to combine his uncompromising desire to foster holiness in himself and his monks with the patience of a loving father. Blessed Isaac of Stella, one of his contemporaries and who was himself a saint and abbot, described him in these words:

[H]e poured out, when present, the delights with which he himself was always overflowing. To everyone he appeared so terrifying when he loved (amore terribilis) and so lovable when terrifying (terrore amabilis), that, at his word or rebuke, no one ever became discouraged, no one was ever stung by impatience or consumed by envy.

When experiencing this “terrible love and lovable terror” of St. Bernard, people felt that they were approaching the frightening and lovable presence of God, whom they saw dwelling and acting in him. To us Cistercians St. Bernard is always present by the witness of his life, writings, and, most especially, by his mystical presence to us in the Body of Christ. With his passionate and steadfast love for God and his monks, we know that he accompanies us to prayer and to work; to church and to school; and that by his prayers he helps us to live out our vocation. 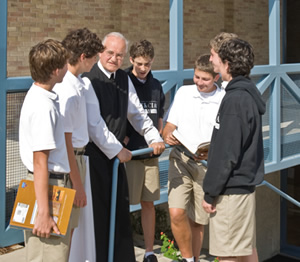 St. Bernard in the Novitiate

St. Bernard has much to teach a young man who joins the monastery. One of the most important things we can learn from him is his teaching on humility. This is why early in the novitiate we begin the study of St. Bernard with his work On the Steps of Humility and Truth, which is essentially a commentary on Chapter Seven of the Rule of St. Benedict. In short, St. Bernard teaches that humility is self-knowledge—the honest acceptance of myself in all my sinfulness. This sincere confrontation with myself inevitably leads to humility; but at the same time this sometimes difficult experience is for St. Bernard the beginning of the true knowledge of God. For the more acutely I see my own failings, the more clearly I can see through them to the outlines of what I am supposed to be: the image of God. It is the humble man alone who can truly mediate upon this great dignity of the human race; for only he has really even seen the imago Dei, because his humility has allowed him to recognize it amidst the manifold sins which would tarnish it.

While humility involves an acceptance of my sins and therefore a certain dissatisfaction with myself, we should be quick to realize that for St. Bernard humility has nothing to do with extreme self-deprecation or pusillanimity. Humility and magnanimity belong together; the later, in fact, is the natural result of the former. For Bernard the perfection of both virtues and their connection is manifest most clearly in Mary:

In her own judgment she was so humble, nevertheless in her trust in the promise so magnanimous, that she who had regarded herself as a handmaid of little worth, did not at all doubt her election for this incomprehensible mystery, for this marvelous exchange and inscrutable sacrament and believed that she would soon become the true mother of the God-man (Sermon on the Octave of Assumption, 13). 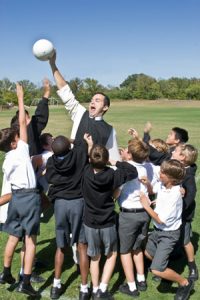 True humility, then, does not make us men of little faith, nor does magnanimity lead us to arrogance. On the contrary, the less we presume to accomplish by our own power, the more we begin to trust that great things will be accomplished in us by God’s power. Paradoxically, it is precisely because the humble man recognizes how little he is that he expects to receive great things. In other words, it is the humble person who knows that all good things come by God’s power; and if God is the guarantor, then we have no cause for anything but confidence and magnanimity. Bernard encourages even the most depraved human being to trust in God’s almighty mercy to purify and raise him to the point of becoming a Bride to the Divine Bridegroom, Jesus Christ.

In order to become that Bride of Christ the repentant sinners must enter the school of love, which for Bernard means, above all, the community of a Cistercian monastery. Community life is a “school of love” because it is in community—in the daily ins and outs of a life filled with the fruits and challenges of close human relationships—that we are invited to acknowledge our own faults and to accept our brothers in spite of their own. For St. Bernard, it is the acceptance of his own misery that opens up the way for the humble man to accept his fellow men, and to draw closer to them in love. The humble man does not set himself above “the others” as the Pharisee does in Jesus’ parable (cf. Luke 18:9-14). He knows that he is in solidarity with all his fellow sinners, and precisely for that reason desires to forgive and love them in spite of their failings. They are all one in their need of God’s mercy:

A brother’s misery is more truly felt by a miserable heart. But in order to have a miserable heart because of someone else’s misery, you must first recognize your own so that you may find your neighbor’s mind in your own and know from yourself how to help him (The Steps of Humility 2-6).

Genuine compassion and, therefore, true love of neighbor are not possible without accepting the reality of our own misery. Only then can we really extend our own feelings into “the other” in order to sympathize with him and feel his joys and troubles as our own. 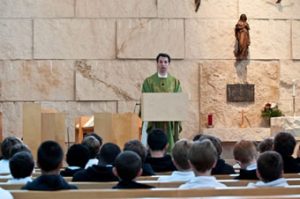 Fr. Joseph Delivers a homily at his Form’s class Mass

For St. Bernard compassion and love for the brothers is best developed in the school of charity which is the monastic community. The humble brother learns here to eliminate his voluntas propria, his self-will which wants to set himself apart from, and above, the community. He embraces the voluntas communis, the will which is in harmony with that of the brothers. The more he learns to prefer the good of the community to his private whims and desires, the more he becomes one with God’s will and the more he becomes unus spiritus, one spirit with God. On this spiritual journey, Jesus is the way, the source of forgiving and transforming grace for the sinner to love his brothers and God; and he is also the goal, the Bridegroom who embraces the purified soul and introduces her into the Bridal chamber of divine love.