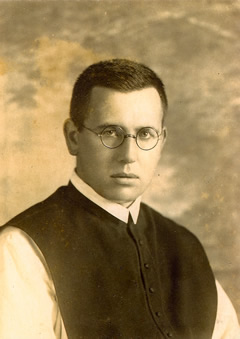 From a young age the future abbot of the great Cistercian abbey of Zirc displayed a keen interest in education. Kálmán Wendelin Endrédy was born in 1895 to working-class parents in Hungary. After attending a local Benedictine academy for secondary school he pursued his ideal of becoming a pastor of souls with a focus on education of the youth. This combination of ministry was happily found in the Cistercian Order at the Abbey of Zirc which he joined in 1917. Two years later he was ordained a priest and taught math and physics with great effect in the following years at St. Emery gymnasium in Budapest (an eight-year secondary school) until 1938 when he was appointed headmaster of the same institution. Such enthusiasm surrounded him for his kind-heartedness and reputation as an extraordinary teacher that both his intellectual acumen and practical leadership qualities sprung him quickly into office as head of the preparatory school.

This term, however, was short-lived, for in 1939 he was elected abbot of Zirc which he faithfully served until 1950. Zirc owned and operated five schools, some twenty parishes and more than 30,000 hectares of land. On account of Fr. Wendelin’s management abilities, demonstrated by his close supervision over the construction of the St. Emery gymnasium in Budapest, in addition to his spiritual depth as a man of God, he was considered a natural candidate for abbot. His influence grew even more with his appointment to a post in the upper chamber of parliament in the Hungarian government. 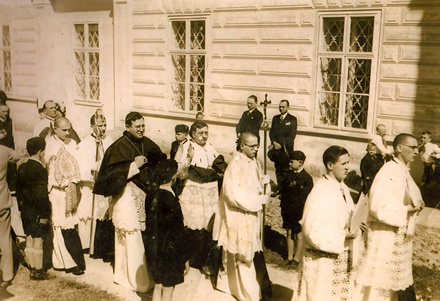 Abbot Wendelin is installed as Abbot of Zirc in 1939.

In World War II, as the Russian front drew closer and closer to Zirc, hundreds of refugees found a safe haven in the Abbey. After the Communist Party consolidated its grip on the country, the summer of 1948 witnessed the closure and takeover of all Catholic and Protestant schools in Hungary.

Liquidation of all religious orders was the next step in the program of the atheist government that aimed at the complete elimination of the Church. They began this operation by trying to intimidate all the religious. Policemen would come to the religious houses in the dark of the night to announce the closure of the institute and the time frame allotted to gather belongings; then all would be transported on trucks to an unknown destination. Fear and uncertainty filled the hearts of many as to what was to occur next. Yet the people were brought to other religious houses and monasteries which, for the time being, were allowed to remain open.

In addition to about one hundred Cistercians, Zirc had to provide shelter for over five hundred nuns who were displaced from their communities. This difficult and stressful situation was tinged with the charity of the local townsfolk who assisted the refugees in providing them with food and clothing. 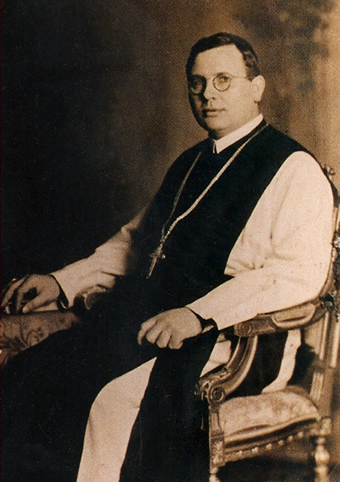 Eventually the Government decreed all religious communities to be dispersed and all their houses expropriated; but, as a showcase for propaganda purposes, eight Catholic schools were allowed to function with a limited number of religious to staff them. But none of the Cistercian schools was allowed to survive. All the Cistercians had to find individual lodging and occupation. Some were accepted by the bishops for parish work, but many became sacristans, organists, teachers, or industrial workers.

Abbot Wendelin, however, remained at Zirc until his long-awaited arrest during the night of October 29, 1950 in order to officially hand over the Abbey to the government authorities. Fr. Lawrence, the novice master of Zirc, was appointed to supervise the dispersed monks and the incoming novices who, from the start, began their formation underground.

Even after being alerted of Moscow’s plans to arrest and imprison five ecclesiastical figures, Abbot Wendelin voluntarily returned to Hungary after a brief visit with Pope Pius XII in November 1948. In 1950 he was finally arrested. At first several searches of his living and office quarters were made in order to discover any incriminating evidence with which to charge him. Nothing was ever found. But on October 29, 1950, the Abbot was cut off in front and behind while being driven to his nephew’s house in Budapest. Following a grueling eighteen-hour interrogation at the secret police station his tortures began:

…I could not even imagine that somebody of my age—I was 56 years old at the time—would be repeatedly beaten, kicked, tortured in all sorts of ways, and then given shots with chemicals that would deprive him of his free will.

Numerous false accusations were cast at him, ranging from charges of espionage against the government, collusion with the ‘enemy’ through contacts with the British and American embassies, and even of “trying to restore Hapsburg rule in Hungary.” In fact, their ‘evidence’ amounted to all of Abbot Wendelin’s intercepted correspondence which consisted of mere status updates of the Cistercian Order, its troubles, its student enrollment and the like. As the Abbot says himself,

Even my interrogators must have felt that these accusations were, in fact, bordering on the ridiculous. For later, when preparing me for my trial, they gave strict orders that if I would be asked about any of these “crimes,” in my replies I must avoid such matters. “If that…judge would ask you such stupid questions, you must do a snow job,” I was told.

Abbot Wendelin served a six-year prison term in multiple locations. His tortures throughout are startling to recount, but his heroic resolve and submission to the persecutions shine through with even greater astonishment.

My first torture took place in an elegant room. They stripped me naked. Then facing a young officer I was forced to begin deep knee bends. Every time I bent down, I was forced to kiss his boots. This went on till, exhausted, I collapsed. Meanwhile I was supposed to answer questions. After I had passed out a few times, I was brought to a cell in the basement. I spent two weeks in a little prison cell that looked like a burial cave of 2 by 1.3 meters (7ft. by 5 ft.). Above the bunk bed there was a leaking sewage line, constantly dripping on me. I was not allowed to lie down. However, while sitting I was still able to catch some sleep. I got no blanket. It was November. I was constantly cold. In these terrible days I was constantly praying to God to make me die so that I would not hurt anyone by what I might say.

I had to undergo a large variety of physical trials. They made me face the wall and forced me to lean onto a pencil-like object set between my forehead and the wall. They put nails and needles under my heels. They pushed against my side the heated plates of electric ranges. When I collapsed they quickly pulled out the plank with the nails and needles and with a few kicks forced me to stand up again.

It is remarkable that years later in conversation with a friend he remarked, “I have no one to forgive,” and that he “would love to suffer a little bit.” It is a testament to his magnanimity and long-suffering through such despicable crimes that he harbored no resentment toward his persecutors. The greatest allowance that he was given was the ability to celebrate Mass in his prison cell. The guards would mock him and put cigarette butts on the altar to disturb and anger him, yet Abbot Wendelin ignored them. Over time the guards left him alone whenever he prayed.

During the Revolution in Hungary he was liberated by the Freedom Fighters on All Saints’ Day in 1956. He was almost left behind after everyone who appeared on the prisoner roster was accounted for and the Freedom Fighters were about to leave. One of them, however, decided to take a last look at all the prison cells and he discovered him in a remote location. His name had never been officially registered on the prison roster. He was a high-profile prisoner left anonymous. 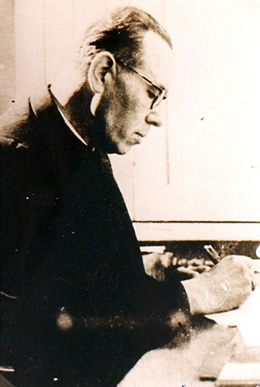 Yet after the Uprising was defeated, early in 1957 he was temporarily reincarcerated only to be set free in August of that year. But this second imprisonment was far more humane. In fact, the warden was quite compassionate toward him. A fellow inmate relates that the warden wanted for Abbot Wendelin to have proper care and treatment at the prison hospital, at which Abbot Wendelin said he would go only if all of his fellow priest-prisoners could go as well.

After his release from prison he spent the remainder of his life in the nursing home at Pannonhalma, visiting with monks, friends and alumni who wished to see him. He was virtually under house arrest, as he needed permission to leave the premises. However, these conditions did not dampen either his spirit or his sense of responsibility as abbot. There, in the nursing home, he continued to operate and serve his monks as the center and father of the Cistercians in Hungary. He had always been very eager to hear about the developing abbey of Our Lady of Dallas where a number of his monks had settled down to serve the Church through educating the youth.

The Communists under whom he suffered so much granted him pardon after more than a year, but he still had to live in the nursing home. Most prisoners had returned to society broken and badly traumatized by their horrific suffering, but Abbot Wendelin was affected differently: he ‘always carried such a peaceful serenity within him’ until his death on December 29, 1981.

One can read more from Abbot Wendelin’s memoirs here.