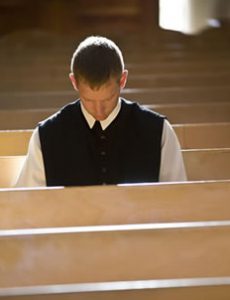 Before sending the Twelve to preach the Kingdom of God, Christ first called them “to be with him” (Mark 3:14). It is our hope that our work as teachers and priests will always remain a fruit of our primary vocation to live the monastic life, by which we seek to “be with” Christ through the life of prayer.

Our monastic life is centered upon the liturgy and the ancient practice of lectio divina, or the private reading and pondering of Holy Scripture. In addition to having designated times for private prayer, we celebrate together the Holy Sacrifice of the Mass and the Liturgy of the Hours daily.

It is through prayer that we seek to raise our minds and hearts to God and live in union with Christ; for it is from him that we find inspiration for all our activities and the ability to discern the direction of our lives (Cistercian Life Today, 59-60).

Besides the household duties of community life and pastoral assistance in local parishes, the primary occupation of the monks at Our Lady of Dallas is teaching. Our work as teachers is in part a consequence of our origins as a daughter house of the Abbey of Zirc, Hungary, which was forced to send her monks out of the country soon after World War II when the Communist government suppressed the religious orders of Hungary. 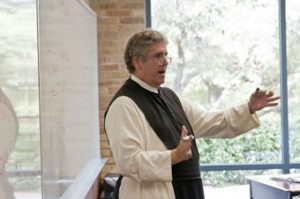 At the time of her suppression the Abbey of Zirc was at the height of a great revival. Almost nine centuries after Zirc had been founded by one of Saint Bernard’s own monks, and two centuries after the strong hand of Providence had directed the monks to commit themselves to priestly and educational work, the Abbey had discovered a successful symbiosis of Cistercian life and apostolic mission, resulting in numerous saintly Hungarian Cistercians and a direct and powerful Christian inspiration on the youth of Hungary. This is the tradition that the founders of Our Lady of Dallas brought with them when they built the first wing of the Dallas-monastery in 1958. Since then monks have taught at various universities, in particular the University of Dallas. And in 1962 the monks came together with members of the local community to found the Cistercian Preparatory School, which is today where most of the monks work.

But our work as teachers is not simply a historical accident. Teaching is an activity organically linked to our monastic vocation. Pope Benedict XVI, in an address to Catholic educators given during his visit to the United Kingdom in September, 2010, explains the profound connection between the two:

“As you know, the task of a teacher is not simply to impart information or to provide training in skills intended to deliver some economic benefit to society; education is not and must never be considered as purely utilitarian. It is about forming the human person, equipping him or her to live life to the full – in short it is about imparting wisdom. And true wisdom is inseparable from knowledge of the Creator, for “both we and our words are in his hand, as are all understanding and skill in crafts” (Wis 7:16).

This transcendent dimension of study and teaching was clearly grasped by the monks who contributed so much to the evangelization of these islands…. Since the search for God, which lies at the heart of the monastic vocation, requires active engagement with the means by which he makes himself known – his creation and his revealed word – it was only natural that the monastery should have a library and a school (cf. Address to representatives from the world of culture at the “Collège des Bernardins” in Paris, 12 September 2008). It was the monks’ dedication to learning as the path on which to encounter the Incarnate Word of God that was to lay the foundations of our Western culture and civilization.” 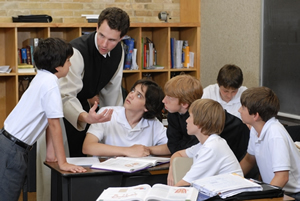 As teachers we seek to preach and advance the Kingdom of God by enriching the minds and hearts of those we teach with the fruits we have gained in our own contemplation, and by leading our students to the source of all truth, Christ himself. As a community of monks and educators our monastery seeks to continue the honorable monastic tradition of serious intellectual life, and to be a center of learning in service of the local Church, which must always be prepared to give an explanation to anyone who asks “the reason for our hope” (1 Peter 3:15).