The years between the end of World War II in 1945 and the Communist takover of the Hungarian government at the end of the 1940’s represented a period of growth and flourishing for the Cistercians in Hungary. Since the Middle Ages there had been no Cistercian monasteries for nuns in the country, but in 1945 seven young women under the leadership of a Cistercian Father, Emil Naszályi, began the Cistercian monastic life in an abandoned cow stall in the midst of the Bakony Mountains, near Zirc in central Hungary. The community grew rapidly until the government suppressed nearly all religious orders in 1950.

The nuns, however, refused to comply with the order to disperse. Under the cover of secular jobs and dressed in civilian clothes, they continued to live their community life and to celebrate the Divine Office in a private house in Érd on the outskirts of Budapest. One of them, Ágnes Tímár, started a new community of young women in 1955 in a Budapest apartment. The original group of four soon began to grow; among the new-comers was Mónika, who is known to us only as Mónika Tímár because she changed her family name to that of her superior – Mother Ágnes Tímár – in order to claim family relation as a pretext for living together, and thereby to avoid the suspicion of belonging to a religious community. 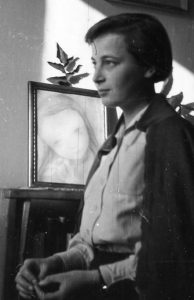 Mónika’s journal (1957-1962) reveals her extraordinary spiritual journey from the novitiate up to her death on December 13, 1962. She was only nineteen when she began her underground novitiate; and yet, soon after her vows, Mother Ágnes appointed her novice mistress for the incoming candidates. When Mother Ágnes was arrested with three older sisters on February 6, 1961, the remaining members of the community elected Mónika to become their acting superior. The police mocked them as they ordered them to disperse: “You are just little girls! Stop playing this nun game and go back to your moms’ aprons!” The police locked up the apartment and left them only the kitchen and a small room. But the young women refused to leave. After a few days it was the police who got tired and left the sisters to continue their life under constant surveillance with the twenty-three-year-old Mónika in charge. The courage of a dozen college-age girls proved stronger than the intimidation of the Communist state.

Providentially, Mónika’s journal escaped the attention of the police who removed the nuns’ library. It is one of the most beautiful pieces of spiritual literature in Hungary: in a style of untranslatable beauty, it reveals the ascent of a pure, fully alive, happy young woman to union with God. She accepted her life as an offering on behalf of her imprisoned sisters, for whom she prayed constantly. The weight of trying to form young and oppressed women into holy nuns – while awaiting an arrest that could come at any moment – consumed her energies: she died on December 13, 1962 from hepatitis. Her journal was smuggled out of Hungary and has since been translated into French, Italian and German. The great theologian Hans Urs von Balthasar wrote an introduction for the German edition.

A few excerpts from her journal can offer at least a hint of her spiritual journey. Towards the beginning of her religious life, Mónika offered herself to God in these words:

Lord, I give myself as the flowers give their scent on summer evenings: quietly, simply, naturally. No one should notice it, including myself. For what “I notice” does not exist – that is only the broken glass of my vanity, comfort and conceit. I don’t want anything. Neither the Bakony nor Gethsemane, neither prayer nor work, neither being quiet, nor speaking, but only to become a soft and pliable instrument in your hand. I want only what you want. And I don’t experience it as a sacrifice; it is not hard and I do not imagine that it is hard. There is hardship and sacrifice only where your are absent. But you are not absent from my life, from my today. This is the only thing I know for sure. You are the king, the director and creator of my days and hours. And it does not matter that I don’t understand it. This or that comes to an end, but the searching (finis quarendi) does not end in this life.

The following text, written in February, 1959, shows Mónika’s love for the created world:

People say that on the higher levels of spiritual life our eyes become closed before the beauty of the world. You don’t notice whether it is spring or winter, whether you walk in a forest or on the shore of a lake.

No matter where God’s grace might raise me, I cannot imagine that I would no longer love the sun, the snow, the fresh, crisp spring wind against which I brace myself and into which I run. I love the trees when they are budding and I love running – not after something but just for the sake of the beauty, the rhythm and the joy of the movements. I love this earth, and I love also my body. I love to stretch my muscles, springing and supple, and I like to get involved in activities that demand all my strength because then everything in me is attentive, all is at service, the blood flows exactly where it should, every single cell in me is awake and ready.

And this does not mean that I keep the world for myself or that I surrender to it – just as you continue to love your family, in fact you love it better and more purely, [the less you cling to it].

It is true, though, that he who sees [God] face to face, does not care about mirrors. But if you have only mirrors, appreciate them, give thanks for them and find God in them.

She wrote the following lines on April 23, 1962, just after her final Easter and as her love of life began to pale in comparison to her love for the life of the Resurrection:

This was the first Easter that I experienced what my mind has already known for a long time: this life is a small, short and fleeting transition; the true reality is the Risen One. Even now I feel the distance, I feel strongly the here and now, but I can never forget the experience that lasted only for a moment. Not that I feel this life to be less real, but that the other is much more real.

After the imprisonment of her sisters, Mónika pleaded with God that she might share in their sufferings, even to the point of exchanging places with them. A few months before her death she wrote:

I am afraid. At times the idea [of being imprisoned] for months or years becomes unbearable… But the desire breaks through the shuddering as the golden rays of the rising sun through the cracks of the grey clouds – I want it, I beg and beg for it!

And today I understood that this is indeed not childishness but pure grace. Pure love that wants to understand, to become similar and to share that it may become a full gift of the self…

Only a few months after her death, on March 21 1962, Mónika’s birthday and St. Benedict’s feast day, her sisters were released as part of a general amnesty. The liberated nuns continued their religious life in smaller communities in order to avoid attracting the attention of the authorities. Nevertheless, all the sisters remained part of the larger community directed by Mother Ágnes, meeting and praying together whenever possible.

In 1966 Mother Ágnes was arrested again along with the long-time spiritual director of the community, Ödön Lénárd, a Piarist father. Fr. Lénárd had been instrumental in guiding the community from the beginning. For his service as a pastor, he spent over eighteen years in a communist prison, the most of any churchman in Hungary. When Mother Ágnes was freed again in 1968, the sisters took advantage and established the first permanent “monastery” in a wooden shack on the slope of the Börzsöny Mountain in the vicinity of the quiet village of Kismaros. At this time, the growing group of sisters was still constrainted to live secretly in separate houses throughout Hungary. But the new house in the mountains could serve as a place for all the sisters to meet at certain times. 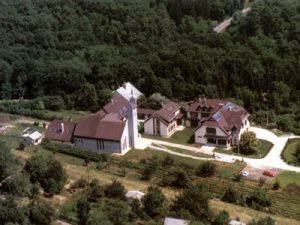 Abbey of the House of the Blessed Virgin of Kismaros

The community of Kismaros was eventually incorporated into the Cistercian Order by Abbot General Polycarp Zakar in 1987, raised to the rank of Abbey in 1993 with Mother Ágnes as its first abbess. In 1996, Abbey of the House of the Blessed Virgin of Kismaros joined Our Lady of Dallas as the third abbey in the Cistercian Congregation of Zirc in 1996. The first stone building at Kismaros was set in 1982, as the nuns continued to defy the existing ban on religious communities. After the fall of communism in Hungary, all the sisters were finally able to assemble at Kismaros and make their life together. Thus in 1990 a larger monastery and guest house were built, and in 1999 the church was finished and consecrated. Having a degree in architecture, Mother Ágnes directed the construction, somehow always managing to gather the money necessary for financing the project. 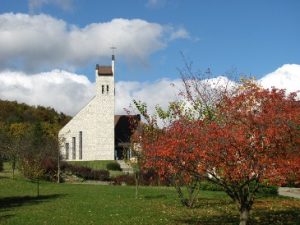 The Abbey Church of Kismaros

After reaching the canonical age for retirement, Mother Ágnes stepped down as abbess in 2003 and the community elected the prioress, Olga Horváth, as their second abbess. Mother Ágnes died on August 31, 2020, and her obituary can be found here. Today, the approximately twenty sisters of the Abbey of the House of the Blessed Virgin of Kismaros enjoy a stable and peaceful life. They are able to play several instruments and to sing well together, contributing to a beautiful and edifying liturgy. They produce honey, marmalade and work with ceramics. In addition, they run a physical therapy clinic in Kismaros and receive guests for retreats and conferences. Several sections of their website are translated into English.

The original monastery from which Mother Ágnes came, known as Regina Mundi, continued to exist in Érd throughout the decades of communism in Hungary. They have not joined the Congregation of Zirc but rather have been directly incorporated into the Cistercian Order under the immediate care of the Abbot General.