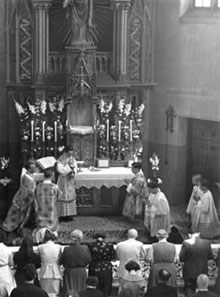 John (János) Brenner was a young athletic teenager full of life, joy and mischief. He went to a Cistercian school only for a few years before the Communist government took over the Catholic schools. But the Cistercian experience remained a defining memory in his heart, and at the age of 18 he began the novitiate in Zirc, when he received the name Br. Anastasius (Anasztáz), even though at that point everyone knew that the religious orders will soon be suppressed. In fact, Br. Anastasius and his novice mates could enjoy only two months of regular monastic life in the summer of 1950. In October, Fr. Lawrence ‘Sigmond, the novice master of the Abbey of Zirc, chose to distribute the novices into private apartments in order to continue their formation clandestinely through weekly small group meetings, removed (hopefully) from the watchful eyes of the police. Some of the novices, like Br. Anastasius, enrolled in a diocesan seminary but kept in touch with Fr. Lawrence by correspondence and periodic visits. 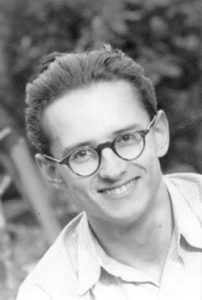 Br. Anastasius made his vows after the novitiate and was eventually ordained a priest in 1955. From the beginning of his priesthood, Fr. Anastasius showed he was willing to make any sacrifice on behalf of those he served. He was particularly sensitive to the needs of children, and he proved to be very effective in the work of teaching and youth-formation. His desire to serve was so strong that he refused to stop even after being warned by a government commissar of personal threats made against him. Even when his bishop offered to transfer him for the sake of his safety, Fr. Anastasius preferred to remain in his ministry, placing his trust in God. On the night of December 14, 1957, he was called to administer the last rites to an allegedly dying man, but was ambushed in the darkness of a forest trail and stabbed 32 times with knives and trampled upon once he was lying on the ground. When the villagers found him dead in the morning, he was still protecting with his hand the Blessed Sacrament on his body. Today a chapel marks the spot where he was murdered and pilgrims come there in procession from many parts of the country. 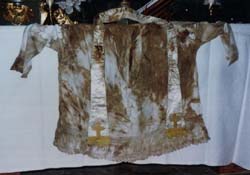 A true relic: the surplice Fr. Anastasius was wearing when he was martyred

Fr. Anastasius kept a journal during the novitiate, excerpts of which can be read here. “My greatest desire,” Fr. Anastasius wrote, “is to be a saint, to live a holy life and to sanctify others.” Seemingly in anticipation of his martyrdom, these pages reveal a man willing to follow Christ even to the point of intense personal suffering for the sake of sinners; his only request being, “May I always fulfill most precisely what you give to me as my vocation.”

On Nov. 8, 2017, Pope Francis received in audience Cardinal Angelo Amato and ordered the publication of eight decrees, one of which declared the martyrdom of Fr. Anastasius (John Brenner) and thus cleared the way for his beatification on May 1, 2018 in Hungary. On December 15, 2020, which is now also the feast day of Bl. John Brenner, Abbot Peter installed into the altar of the abbey church a first-class relic received by Fr. Denis soon after his beatification.