In the first half of the 20th century, the Cistercian Order in Hungary began to flourish in many ways. Its five schools combined high academic achievement with close and caring human relationships between students and their teachers. The ideal for these monks became more and more clearly the threefold vocation of monk, priest and teacher. The best of them tried to live it in such a harmony that each aspect would strengthen rather than compromise the others. These Cistercians were blessed with success: the Cistercian schools developed a high reputation; the Cistercian parish in Budapest became an admired model for Christian community building and effective lay-apostolate; and the beautiful liturgy of Zirc, their mother monastery, attracted more and more people who came to be inspired by the monks’ prayer. 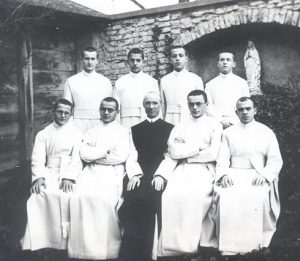 When, with the help of Soviet military occupation, the Communists came to power in Hungary, one of their primary targets was to abolish all Catholic Schools and disperse the communities of religious orders. But the dispersion of the Cistercian communities and the imprisonment of 4O members only strengthened and matured the best and holiest among them. There are many whose struggles and virtues need to be told and remembered, but this is only the story of Fr. Lawrence S’igmond.

Fr. Lawrence had a brilliant mind and enjoyed studying, but he never became a famous preacher or a great scholar. Instead of striving for a Ph. D. – which he could have easily obtained – he aimed at becoming a good teacher and spiritual father to his students at the Szent Imre gymnasium in Budapest.

As he later explained to his novices, the Cistercian teacher should be like St. Joseph: the children he teaches are not his own yet he should love them more than he would his own. In fact, several of his former students stated that they felt nobody (including their own parents) loved them more than Fr. Lawrence. A member of his class, who went on to become a highly respected university professor, once told how, after he caught him as a little boy mistreating his textbooks, Fr. Lawrence told him to bring all his school books to him in the Cistercian Residence. There Fr. Lawrence explained to him how he should handle his books with care. The old professor remembered this little lesson and the kind, personal treatment for the rest of his life!

The most important period of Fr. Lawrence’s life began after he was appointed novice master of the Cistercian Abbey in Zirc. From 1946 up to 1950 he was responsible for the overall formation of 10-20 novices every year and for the spiritual formation of 35-40 junior brothers. As the Communist state suppressed the religious orders and imprisoned Abbot Wendelin, Fr. Lawrence was designated to be the Abbot’s vicar, and thus he became responsible for taking care of all the dispersed members of the Hungarian Cistercian community: the sick, the old, the incarcerated and the young who were still in need of spiritual and theological formation. He also continued to receive new candidates into the Order, and to organize and carry out their formation in a climate of hostile repression and constant threat of arrest. Yet he managed so successfully to convince the secret police of his own unimportance – he became a Russian language tutor as a cover job and for supporting himself – that for 11 years they only watched him (rather than arresting him). Instead of lamenting and brooding over what the Order has lost, Fr. Lawrence considered the persecution of the Church and the Order as a providential opportunity to develop a deeper understanding of religious life, and the chance to create a strong style of “underground” monastic life without the support of living openly in a stable community. In this way he paved the way for future Cistercians to enjoy a new springtime of the Order and the Church after the inevitable collapse of communism. Without his continued work of recruiting new novices and helping them internalize the essentials of monastic life, it would have been even more difficult to revive the Hungarian Cistercian community in 1990, after 40 years of official suppression. 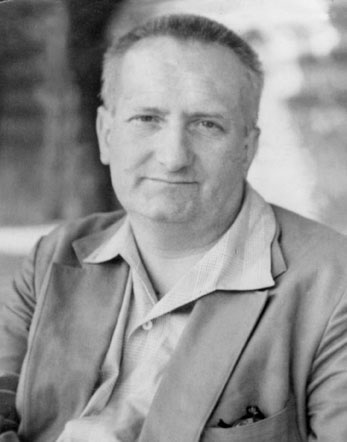 The secret police finally arrested Fr. Lawrence in May 1961. Shortly after that it became apparent that he had kidney cancer. After one of his kidneys was removed in the prison hospital, he was sentenced to seven years in prison. We will never know the extent and the depth of the physical and psychological torture he had to endure during his incarceration. As he was taken to X-Ray treatment, one of his fellow Cistercians, with the help of the doctors, managed to smuggle in Holy Communion for him. He sent his fellow monks this message, the only unsupervised communication during his term in prison: “Tell them that I am happy.”

After two years in prison, when it became obvious that his cancer was terminal, the authorities released him to the priests’ nursing home in Pannonhalma. This was consistent with their general efforts to avoid creating martyrs. Fr. Lawrence lived there for only one more year; and he spent some of the time writing letters in which he was able to summarize his teaching on spiritual life. The recurring cancer attacked his bones and eventually broke his spine, which paralyzed his entire body. In this final and frightening trial he became, in the words of one of his confreres, “a whole burnt offering, given over to God.”

Since then we Cistercians have experienced his help in many ways and at many times. His teaching remains for us both in Hungary and Dallas an inspiration to remain faithful to our Cistercian heritage and to the priestly and educational tradition of the Hungarian Cistercians. His example gives us assurance that God wants to lead us on this way to constant renewal and holiness.

As he organized a clandestine novitiate Fr. Lawrence often communicated with his novices through letters and periodical visits. Some of the letters he wrote to Fr. Anastasius can be read here. In addition to the wisdom and love of Fr. Lawrence, these letters illustrate a beautiful relationship between two saints and martyrs.