Our Lady of Dallas Today 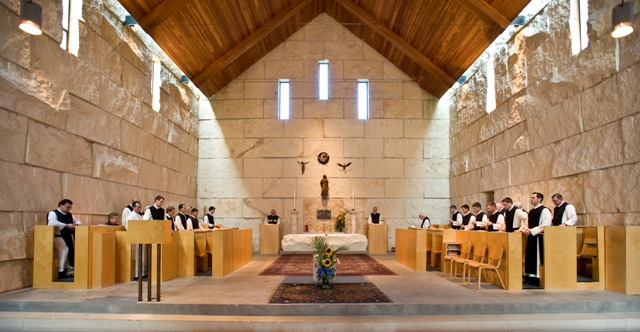 In the 1970’s the abbey received its first American-born vocations. Between 1970 and 1992, six Americans joined and persevered in their lives at Our Lady of Dallas, thereby ensuring that the sacrifices endured by the first generation to establish a Cistercian presence in Texas would bear fruit. In recent years, God has blessed the Abbey with an inspiring number of young vocations, including several alumni of Cistercian Prep School and the University of Dallas. Over ten young monks have made solemn profession since 2008, and several more are currently in formation.

The monks assemble in the sanctuary five times a day to pray the divine office and celebrate their conventual mass. During the school year mass is celebrated several times daily for the various classes of Cistercian Preparatory School. On Sundays a congregation of approximately three-hundred gathers for the abbey’s conventual mass, which the monks accompany with Gregorian chant. Our Lady of Dallas is popular for its Easter and Christmas liturgies, and for its morning mass during the week.

The monks work at both their own secondary school and at the University of Dallas, serving at both institutions as teachers and priests. Members of Our Lady of Dallas also provide pastoral assistance at various parishes in the Dallas and Fort Worth dioceses. By God’s gracious Providence, today the monastery enjoys much life and happiness in its vocation to live a monastic life in service of the Church in Texas.

Next: Our Lady of Dallas Timeline