Hungary and the Congregation of Zirc 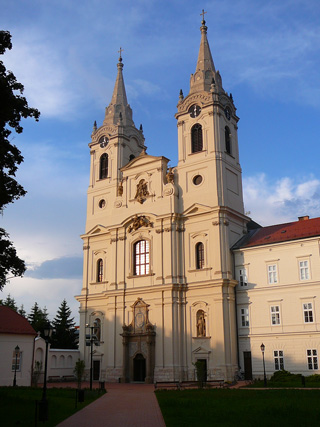 Façade of the Abbey Church, Zirc.

Cistercians first came to Hungary during the lifetime of St. Bernard (1090-1153). The first Hungarian abbey, Cikádor, was founded in 1142 by Heiligenkreuz, itself a daughter-house of Morimond. Over the next several decades, under the patronage of the Hungarian kings, a dozen more foundations followed, including the Abbey of Zirc, which was started by monks from Clairvaux in 1182 and sponsored by King Béla III. Cistercian life continued in Hungary until the Ottoman Turkish invasion of 1526, when all Hungarian monasteries perished and the country became a battleground between East and West for over a hundred years.

More than a century later, in 1699, and after several failed attempts, Cistercian life finally returned to Hungary. The Silesian monastery of Heinrichau (then in Prussia, now in Western Poland) obtained the charter for the Abbey of Zirc and sent missionary monks to rebuild it. The monastery was re-built over the course of a few decades, and a new church was consecrated in 1751. When the Hapsburg Emperor Joseph II (1780-1790), by then King of Hungary, began suppressing the monasteries within his realm, the Abbey of Zirc managed to survive largely because of the political protection provided by its mother-house in Silesia.

Beginning in 1776, Cistercians in Hungary decided to enter the field of education, assuming responsibility for several secondary schools that had been deprived of religious leadership after the suppression of the Jesuits. This added apostolic project gave significant vitality and a new orientation to Cistercian life in Hungary. The community that began under the administration of German monks in the 18th century quickly attracted native Hungarian vocations who enthusiastically embraced the mission of teaching. When its mother-house in Prussia was suppressed in 1812 by the government of Frederick the Great, the Abbey of Zirc became an independent Hungarian abbey for the first time since the late Middle Ages. By 1912, just before First World War, the Abbey of Zirc was responsible for five secondary schools and fifteen parishes. A house of formation was built in Budapest in order to allow many of the young monks to study at some of the best universities in the country. Cistercians teaching in secondary schools lived throughout the country in dependent priories or residences under local superiors, but all authority remained centralized in the Abbey of Zirc. 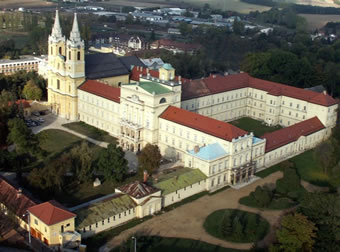 An aerial view of the Abbey of Zirc.

The life of the Abbey of Zirc changed dramatically soon after the end of the Second World War, when Communist forces began to frustrate and eventually suppress most religious orders in Hungary. In what was called an “agrarian reform,” all the land owned by the Abbey of Zirc was confiscated in 1945 in exchange for a promise by the government to support its educational institutions. The Cistercian schools, however, were soon nationalized in 1948. Finally, in 1950 the monastery and all its dependent houses were formally suppressed. From October 15, the Cistercians lost their legal right to function as a religious order. During this more intense period of persecution, the communist regime arrested more than forty members of the community, including Abbot Wendelin Endrédy. The novice master for the Abbey of Zirc, Fr. Lawrence ‘Sigmond, was appointed secretly by the Abbot’s Council to take over the administration of the community. After the Abbot’s arrest and until his own, Fr. Lawrence heroically assumed responsibility for preserving contact with all members of the scattered community, providing care for the sick and elderly members, and conducting an underground program of spiritual formation for the young. Thanks to both Abbot Wendelin and Fr. Lawrence, many Hungarian monks were able either to flee the country or to continue to live out their vocation amidst oppression.

Next: Cistercians in Texas